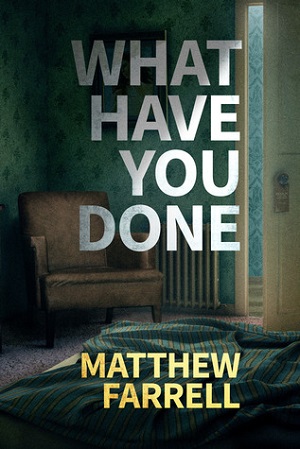 Matthew Farrell is a rising star on the thriller scene. What Have You Done is already a Washington Post bestseller and an Amazon Charts smash hit. It seems likely that there’s going to be a point in the future where Matthew is one of the biggest names in the industry. More than 2,000 positive reviews on Amazon indicate that for many people – he already is.

We begin in a motel room where the body of a woman has been discovered. It’s been mutilated and near destroyed. Liam Dyer, the local forensic guy, has arrived to investigate what he assumes will be a standard case. The trouble for him is that he knows the victim. The bigger trouble is that he has motive to kill her. Worse, he doesn’t know what he did on the night of the murder.

He turns to his brother, Sean, for advice and support. Sean is a homicide detective and can offer Liam insight into the case that he can’t get anywhere else. But, all the evidence is pointing the finger at Liam and it feels like the noose is slowly tightening around his neck. As Liam searches desperately for a truth that will exonerate him – he starts to think the unthinkable; is his brother the killer?

Lisa Scottoline, the New York Times Bestselling Author, says, ““A young crime writer with real talent is a joy to discover, and Matthew Farrell proves he’s the real deal in his terrific debut, What Have You Done. He explores the dark side of family bonds in this raw, gripping page-turner, with suspense from start to finish. You won’t be able to put it down.”

She’s not wrong. What have you done is one of the most exciting reads of recent years. You can check the price of What Have You Done on Amazon here; at the time of writing – it’s on a promotional deal.

You can win a copy of What Have You Done by Matthew Farrell too. Mom Reads is happy to give one lucky reader the chance to read this for free! Enter Now!